The history of the olive dates back to times before man organized his life on earth. This can be concluded from various sources. In his work “Origin des plantes cultivees”, De Candole mentions that the cultivation of the olive tree was known to exist in 4000 B.C. and that the origin of the tree is from the coasts of Asia Minor. He based this conclusion on the existence of self-sown wild olive tree vegetation, as well as ancient texts by various writers and on excavation findings. Based on excavation findings in Knossos, Anagnostopoulos (1951) claimed that the origin of the olive lies in Crete. This is supported by the fact that the name given to the olive tree is Greek and was thus preserved in all languages. Today, throughout the world, there are approximately 800 million olive trees of which around 95% are cultivated in the Mediterranean basin which has the best soil and climatic conditions for olive cultivations. The olive is widely cultivated in Greece. The popularity of the olive cultivation is greater than any other type of fructiferous tree and occupies approximately 15% of cultivated agricultural land and 75% of arboraceous cultivations.

The history of Olive oil

Olive oil or the “liquid gold” as Homer called it, was not just a source of food during the age of antiquity, but also a symbol of good health and strength, a medicine, as well as a source of magic inspiring great admiration. Particularly in Ancient Greece, athletes and warriors would rub it all over their bodies, because they believed that it would give them strength and good luck, the heads of the nobles were anointed with it, and drops of olive oil would be scattered on the bones of dead saints and martyrs, as it was a symbol of benediction and purification. The cultivation of the olive oil dates many centuries back. Olive tree fossils have been found in Livorno, Italy dating back 20 million years, while the cultivation of the olive tree is estimated to have begun in the broader Mediterranean region, about 7,000 years ago. With respect to Greece, the first testimonies regarding its cultivation on Greek soil, according to archeological finds, began in Crete, 3,500 years ago.   Factors affecting olive oil:

The various types of olive oil: 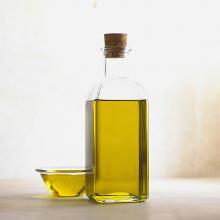 Refined olive oil: This olive oil is nearly tasteless with an acidity of up to 0.3%. Olive pomace oil: This has a soft, mild taste and comes from the mixture of refined olive pomace oil and virgin olive oil. Green olive oil: Green olive oil is the first oil of the year which is collected and delivered to us after much hard work and effort, and it is produced in limited quantities. In mid October, depending on the weather in the region and conditions in the particular year, the olives which are the most fresh, strong, unripe and green and which have not wrinkled, nor been beaten so that they fall from the tree, are collected to make the oil, which is immediately analyzed to confirm its quality and characteristics. This, however, does not mean that all the first oils of the year are green oils. The oil from the first, green fruit, of the first harvest is special and, in fact, according to the International Olive Council, the basic organoleptic criteria of assessment are focused on three of its main characteristics. On its fruitiness, bitterness and spiciness. In other words, this is an olive oil that bears a strong olive flavor and aroma which make it unique and special.